My 2014 Cross Country Mountain Bike racing season started in February, with Round 2 of the NZ Champs in Nelson. Following that, I decided to target these races:

Finally, the Graperide in April. The Graperide is the South Islands largest cycle event but unfortunately takes place on the road. Nonetheless, I was keen to see how I would get on. Read on to see how the season turned out for me.

I had a new bike for this year, an amazing piece of equipment but with smaller wheels and whippier handling than I was used to. And my lasting memory from the Top Gun race is how unpracticed I was with this new machine. I started well enough, but half way through the first lap I had my first mishap. A junior rider had crashed in front of me and I barreled into him, dropping back to third position in the process. The course was wonderful; tight flowing laps five minutes from Nelson’s city centre. But I never really got into the groove, coming off later in the race also. Nonetheless, I won my class with a wonderful display of how not to ride a mountain bike. A good wake up call though – I was seriously under prepared in the technical bike-handling department. 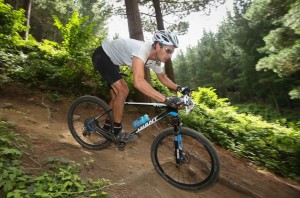 Just a week after the Top Gun, the format for the Club Champs was a little different this year. The title would be decided by a combination of fastest in a 2km time trial, plus fastest in the traditional multi-lap race. Again it was held on Picton’s sensational singletrack. There were 39 entrants, so a good turnout for our little club. After stage one, I had a bit of a lead going into the traditional race. I was curious to see how I would go after my rusty ride at the Top Gun especially as Picton’s trails were even tighter and more technical. I’d practiced my bike handling a bit, and it paid off. No accidents and a solid ride with first place. I was getting used to the new bike.

I’d won the Coppermine Enduro last year, so this year I chose to enter the main event, the Coppermine Epic. One of the larger MTB races on NZ’s Bike calendar, this is where the cash prizes are up for grabs. I was hoping for a top ten finish, although I’d be pleased to just ride well and come away unscathed. Why unscathed?  Because the Coppermine Epic is a challenging course, and – to be frank – I felt a little intimidated by the prospect of racing it. Here’s why. 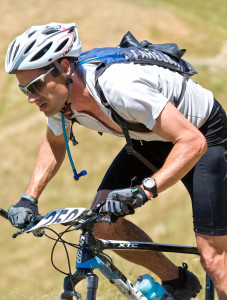 It begins innocuously enough, with a long gradual climb up to a 4 way junction. From here, the Epic course takes a left, and a punishing climb ensues – a good ten minutes plus of granny gear. Then without respite you’re into Black Diamond ridge, which is extremely technical in parts and inevitably involves some bike-carry sections, as well as dodgy descents. The never-ending descent down from Coppermine saddle had cut up over the proceeding weeks with babyheads strewn willy-nilly. But because this descent is so long, you have to throw caution to the wind if you want any chance of a good time. And because I only had the semi-slick tyres that came with the bike (not to mention a lingering lack of confidence post Top Gun), I was not rating my chances on this dicey circuit.

I started well enough, but didn’t feel great up the first climb. Second gradually gave way to fourth, then disaster struck. On the most basic part of the course I snagged my bar-end on a bridge handrail, flying off the bike. The saddle was at 45 degrees, and the front brake lever was pretty much pointing backwards. Furious at such a simple mistake, I dismounted and spent the next two minutes trying to fix the bike. A few more riders past me before I hopped back on and continued the gradual climb. ‘Just put it behind you, ride in the moment’ I told myself. And that’s what I managed to do. I then felt surprisingly good going up the killer climb to Fringed Hill before negotiating Black Diamond Ridge and then the coppermine descent without any further spills. I thought I was coming fourth with only the long flowing flat section remaining, and was struggling to hold on – the legs had almost expired. But I clung on to what was actually fifth place in a time of 2:22.

This was a great result for me, not so much fifth, but the way I recovered after the early crash and grimly clung to my position during the last half hour. I didn’t look back but I could sense them breathing down my back!

With the Alpine Corral cancelled, I had a big break after the Coppermine. In the days leading up to the Oceania’s, I’m sure all the competitors eagerly watched the weather forecast, as a huge cyclone was due to hit Canterbury at race weekend. These days, with tubeless tyres, a lot of non-elite riders (me included) opt to avoid the rigmarole of changing tyres to suit conditions. So I was relieved when race day dawned clear, with the promise of an awesome day’s mountain bike racing.

I’d ridden the course the previous day, and was pleasantly surprised with it. There was a pretty technical descent (which was even a section of a national downhill racing course), and some swooping high speed stuff at the other end of the figure eight.

Us Masters competitors were racing in the morning, with the track still a little muddy (though it dried out later in the day for the Elites). Although it wasn’t a huge field, I still had some stiff competition. I had to dismount up the first technical switch back climb, running into the wheel of Andy Reid in front, where Steve Bale ahead of him had made a small error.  My lack of anticipation cost me, and I had to work very hard immediately afterwards to stay in touch.

I did catch up though, and then edged in front at the end of the first lap. The second lap was without incident, although at the start of the third I dropped my water bottle at the feed zone, which forced an about-turn. Luckily by that stage I had a bit of a gap, which I didn’t relinquish.

So, coming first across the Oceania Masters was a great end to the MTB season. I then enjoyed an afternoon of watching some of the world’s best competing, with Dan McConnell from Australia taking the win in the main event. And I still had a little energy to run around the course like a madman with my camera trying to capture it all!

The Graperide never eventuated. I wanted to have a crack at it on a road bike, knowing I’d have good fitness from all the Mountain Biking. But, never a fan of road bikes, my knee protested and forced me to merely spectate. The injury came right soon after, so I’m glad I made the decision to sit it out. There’s always next year.

So, all-in-all 2014 was a good season. I wouldn’t have much chance in these events if it wasn’t for my wife Katia, who always supported me at the races and encouraged me in between.  There was a lot of learnings along the way, as well as a lot of fun, which surely is what it is all about. Here’s a write-up from the Marlborough Express.