Easter, and with a week for a family holiday we had a difficult choice – where to go?

Having escaped Auckland over a year ago, we’re finding there’s no shortage of destinations here in the South. But things get a little more problematic when you throw a Terrible Toddler into the equation. Whale watching off Kaikoura? Not permissible with a little one. Hiking in the Nelson Lakes National Park? Nope. Bike the Heaphy? Maybe in a decade. But then a brilliant idea struck. What placates the boy more than anything is a long dull drive. Which made a Camper Van holiday the obvious choice.

Our plans met an inauspicious beginning. Cyclone Ita had severed all arteries south, allowing us eventually to travel to Christchurch via Lewis Pass. We arrived to collect our camper almost 9 hours after initially leaving Blenheim. Yet the day’s misfortunes were not over. Whilst installing the child seat, the van door swung into a parked car. The attendant took offense (rightly so), and in the distraction Terrible Toddler toppled out of the cab. TT fortunately sustained no panel damage, however the parked car was less lucky. We were exhausted, expenses were rising faster than a knife fight in a phone box, and TT was singing his high decibel song. I was already thinking that maybe a camper van holiday wasn’t such a bright idea, and our adventure proper hadn’t even begun.

As we trundled towards Otago, however, life in our little van began to improve. The weather brightened and autumn’s amazing colours surrounded us. The TT picked up on the more relaxed ambience, stopped exercising his lungs and started noticing the countryside passing by. His vocabulary grew with sightings of the unfamiliar – sheep, cows and of course trucks. Up front with us, he was less inclined towards sleep and more inclined to interference – such as attempting to steer the van or change gears for me.

Otago in late April is stunning, and we spent a fair bit of time enjoying the fiery flora of Arrowtown. But around this time another calamity struck – an infringement notice for allegedly violating the freedom camping bill. The authorities got it wrong and finding that ticket on the windscreen wasn’t exactly the ideal way to start the day. (And we couldn’t blame TT for that one). 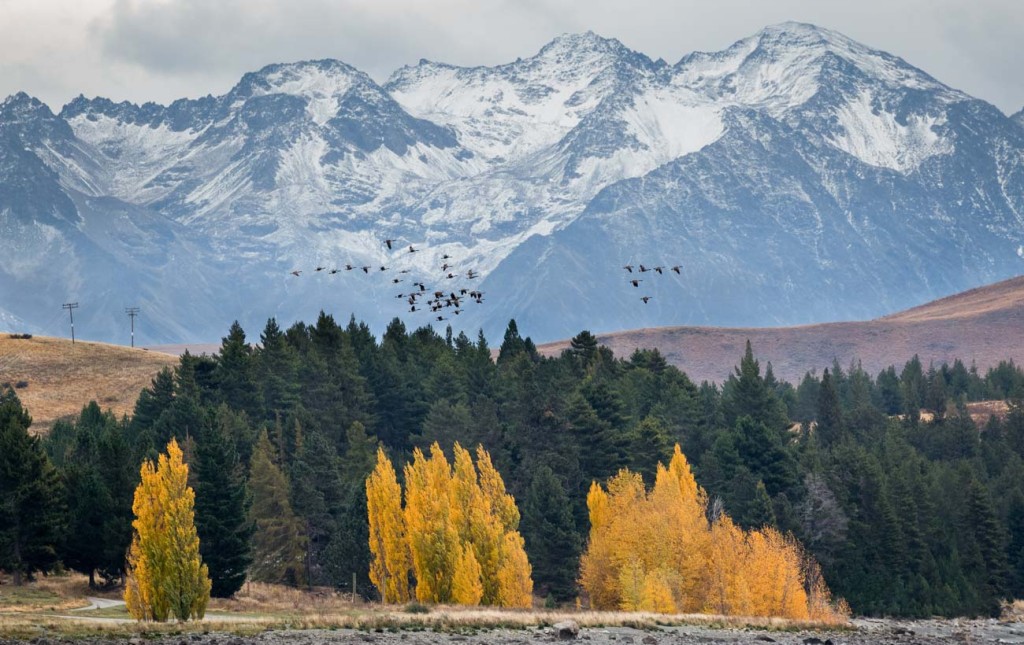 Simple tasks such as washing and cooking posed a bit of a challenge. There were some chilly submersions in mountain lakes which were a touch uncomfortable. When I asked TT if he minded going for a dip there was no response. I took it as a sign of assent, however the resulting squawks indicated he’d rather stay unwashed. (We did make it up to him with a trip to the lolly shop in Arrowtown though). The cold made the ubiquitous hot tinned soup taste better, but we were still grateful to have taken a little home cooked food. We had all the organisational challenges that come with three people living together in a confined space. However we quickly learnt that we’d get by so long as we had three key items at hand – a torch, a toy, and a disposable nappy.

For lengthy periods TT was stuck between his Mum and Dad in the cab, and he generally enjoyed being up where the action was. Around Franz Josef, however, he displayed some disapproval at his position and unleashed one of his fiercest weapons, the dreaded projectile vomit. Obviously (being on the west coast) it was raining cats and dogs and with limited water in the wagon we were forced to run to and fro from a public toilet, gathering water and toilet paper to clean up the mess. I’m happy to report, for any would-be camper van hirers, 99% of it ended up on his child seat and his parent’s clothes.

Traversing Arthurs Pass and nearing the end of our little adventure, we reflected on the trip and what we’d do differently next time. Firstly, we’d be less ambitious with our itinerary; travelling 1300-odd kms over a week doesn’t leave much time for rest and relaxation. We decided that leaving TT at home or dosing him with sleeping pills wasn’t an option. Maybe we’d take a few more of his toys. Hire a slightly larger van. But really, a toddler’s a toddler and they’re never going to be a walk in the park on a trip like this.

It was a wonderful trip, full of adventure, challenge and fun. Probably the best advice I can think of is to allow a few days to unwind after it’s all over – a proper holiday from the holiday!