After a long winter, Labour weekend is normally a prime opportunity for a weekend of leisure. The urge to escape the confines of the Wairau Valley was upon us, so I threw a dart at an ever dwindling list of unvisited South Island destinations. The result was Farewell Spit, or more precisely, Puponga, at the base of the spit. And to add a touch of romance to the sojourn, my wife & I decided we’d get back to basics with nothing more than a tent. Oh, and a toddler. Well, forget about the romance part.

An early start from Blenheim was followed by breakfast with the birds at Pelorus Bridge, a chunder break on the evil Takaka Hill, and a trip to Anatoki Salmon Farm. I wanted the boy to witness his father’s fishing prowess, so what better way to do it than in a small lake packed with 4000 hungry fish. Three short casts later and I was hauling in the big one. Twenty long minutes later and we were gorging on our fresh hot smoked salmon. Golden Bay has its fair share of gems, and this salmon farm is surely one of them. 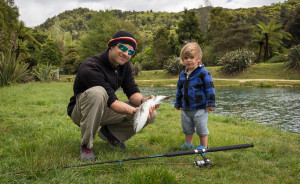 Shortly afterwards we reached tiny Puponga. Our first impression was how remote and exposed this part of the world was. And how much there was to explore! Biking and walking tracks crisscross an unusual landscape of caves, cliffs and large expanses of sand. Our first short trek was to popular Wharariki beach, where we were almost blown off our feet amidst fierce gusts and swirling sandstorms. Inhospitable yet undeniably picturesque, I vowed to return when the environment was more congenial. 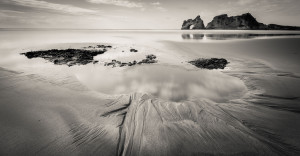 That night the unpredictable weather raged against our little tent but miraculously we awoke dry and still in the same campground. Another day, another walk, this time along the sandy stretches on the actual spit. Pale rainbows sprouted like toadstools amidst scudding grey clouds as we trudged a forlorn one hour circuit. Toiling further towards the tip of the spit wasn’t an option as A) it’s not allowed and B) we were completely buggered. There was not as much bird life as I expected, but then the timing of our visit wasn’t quite right for viewing the great inter-hemisphere travelers.

Back at camp and the long weekend vacationers had arrived in abundance. This proved a blessing as our toddler terror was busied by a score of mischievous younglings. Night fell and the squawks of the children faded. Precious adult time commenced, accompanied by clearing skies and some star gazing over warm cider and salmon remnants.

Our final day saw an unleashing of the mountain bike, and the unavoidable spattering of sheep manure that comes from traversing a farm park. The biking is not loon-grin inducing (like, say, the Coppermine) but it was great for those who have little patience for hiking and want to experience some great views. The panorama from Pillar Point lighthouse was superb, and great vistas of the ever stretching spit were had from Old Man Range. I’d recommend the lighthouse trail only to experienced mountain bikers though; melon sized rocks and sheer hundred foot drops threaten to punish the unwary.

Our day of departure dawned and the public holiday lived up to its name. The seclusion of the area gives it its charm but the drive is certainly laborious. (At least this time there were no unplanned stops on that cursed Takaka Hill). And while sleeping under the stars in a tent has a certain allure, there’s definitely a bit more labour involved in returning things to their stored condition. But Golden Bay is a great place for a holiday. We’ll definitely be going back, but we might choose a different season – and a different dwelling.