It there a defined moment when a boy becomes a man? Is it moving out of home? Perhaps his first date? Or maybe the uninterrupted consumption of a yardie on his 21st? Pondering this critical question, I came to the conclusion that it’s a journey, and the time had come for my 3 year old to take his first steps on this path. A night in Marlborough’s rugged back country was the answer – Boys vs Wild.

But where to go? Little legs could only clamber so far. With the recent destruction of Pine Valley Hut, the next most accessible choice seemed to be Lake Chalice. However the topo maps showed the incline to be rather brutal. But then, I did want to push the rascal outside his comfort zone. So, being in an unsympathetic mood, the decision was made.

Negotiating the spaghetti-like Staircase road en route was the first challenge. Recent storms had cut it up badly, but at least it had the effect of lulling the boy to sleep. “Rest up mate, you’re going to need it” I thought. We eventually arrived almost 2 hours after leaving Blenheim. The sun was just starting to sink as the lake twinkled far below.

The last of the cars cleared out just as we set off. We would have the hut to ourselves which was probably just as well. We were likely to be disruptive lodgers and I didn’t want to wake people in the middle of the night. Or worse, have the boy wet his bed whilst on the top bunk.

Like a lot of tramping in the Richmond Ranges, the track is tough going; steep and rocky. There are no views, and in places the forest is deep and dark, which reminded us of Little Red Riding Hood’s ill-fated journey. The boy coped well initially, full of enthusiasm for our night away, although there was the occasional mention of hungry wolves. To distract him from dark imaginings and the physical ordeal, I filled his head with talk of roaring fires, roasting marshmallows and slaying beasts with our slingshot. But the day was really closing in, and after a number of toddler-tumbles I resorted to some kid-carrying. It was hard yakka, 25kg on my back and 15 up front, so it was with relief when we finally glimpsed the hut through the trees.

Dark, cold and over 50 years old, the hut nonetheless provided all the necessities – a fireplace, running water (albeit from a creek) and shelter from the creatures of the dark. But time had run away from us, and straight away we were preparing for the night. The boy for some reason insisted on sweeping the hut meticulously. (These little ones never cease to surprise you). I was attending to the fire, but my already dubious pyrotechnic skills weren’t helped by the damp wood. We got there in the end and before long the marshmallows came out, followed by a drinking session (warm milk for the boy, warm Riesling for me). Lying in bed my thoughts were occasionally interrupted by a small voice asking if daddy was still there. Exhaustion quickly won out though, as all voices and thoughts faded away.

We were awake before dawn. I had plans for some star photography but the weather had turned and the crystal stars were veiled by scudding clouds. So as soon as the ghostly grey light appeared it was time to explore the surrounds. The hut is set slightly back from Lake Chalice, but it only takes little legs ten minutes to scamper over rocks to the water’s edge. There is a walk around the 2 kilometre long lake, but I was already anxious about the boy’s ability to hike back up to the car, so we loitered instead. Much to the boys delight, I produced a pocket full of walnuts, the slingshot and some UHF radios. I explained that any of these items could be used to save your life in the wild, although I think he was just interested in feeding his face. The cracking of nuts gave me a chance to snap some photos, but then it was time to get going. Deadlines were looming back in civilisation, and the return climb would take goodness knows how long.

Despite Mum’s absence, packing and cleaning the hut was swiftly dispensed with and before long we were off. (Leaving the quaint old dwelling with perhaps the cleanest floors in Marlborough – the boy had once again amazed me with his fixation on broom-work). But here the real challenge would begin, an ascent of almost 500 metres over a couple of kilometres. At least our packs were a little lighter than on the way down.

Our skyward slog began poorly. With the first steep climb, the boy’s thus far impressive resolve crumbled completely. With loud wails reverberating throughout the peaceful forest it was time for a good bloke-to-bloke talking to. I can’t remember exactly what was said, but it was not directly from the Plunket handbook. “Toughen up” was used. Whatever, it had a sensational effect. With a spring in his step, progress became quite quick. After that, he hardly faltered at all. And when he did show signs of fatigue, a chemical hand warmer was all that was needed as a distraction. I was maybe a little bit proud of him.

90 minutes after leaving the hut, we spotted the car. What a welcome sight! After some exaggerated high fives, we drove a short distance to Staircase Saddle for a feed. (After such an effort it was only right to dole out large amounts of chocolate). Parked up in the car and with the tapestry of the Wairau Valley laid out below, I reflected upon the experience. I had been a little concerned about how the young man would handle this, but the resilience of youth had surprised me. As for the location, Lake Chalice is peaceful, if not stunning. Perhaps we’ll attempt Angelus next as the he continues his journey. I turned around to enquire about his favourite part of the night away, but the young man was fast asleep… 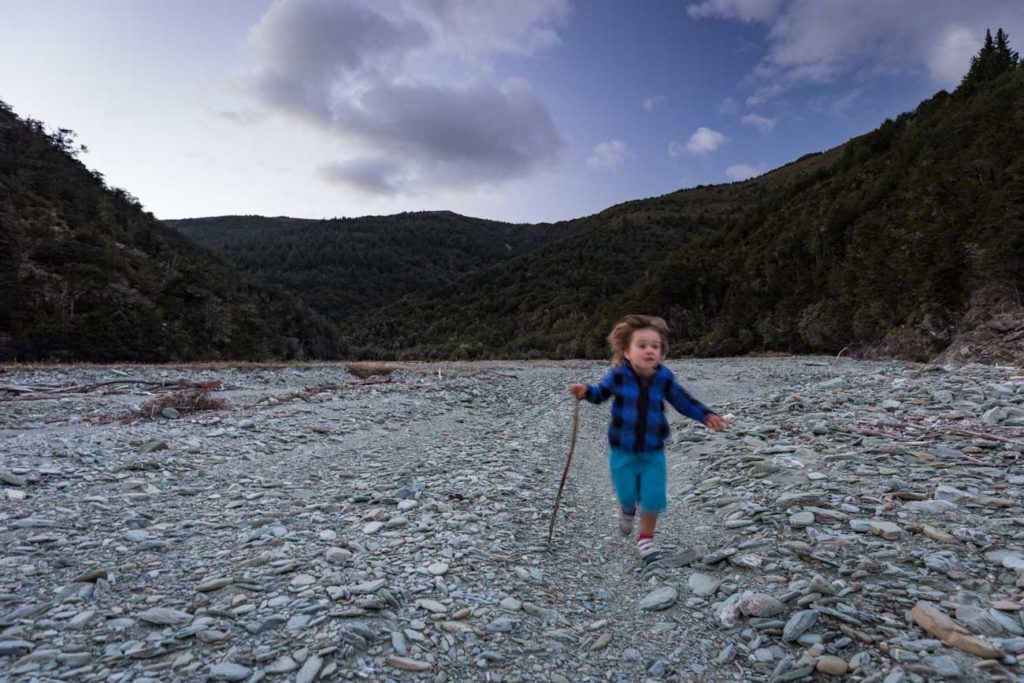