The top of the south island is ideal for those needing some peace and quiet, and no place is better than the Marlborough Sounds. I’d just come off a frenetic Christmas ‘holiday’ in Auckland and it was now time to unwind. But I wanted something a bit different, so it was off to a destination well off the radar – D’Urville Island.

French Pass, the gateway to the Island, is little more than 2 hours from Blenheim or Nelson. Delightful in its own right, French Pass is the quintessential kiwi seaside town. There’s a few baches, an ice cream shop, flowering pohutukawa, a campground and not much else. I lazed on the seafront under the warm summer’s sun until the water taxi whisked me off to the island.

But there was a job to accomplish en-route; obtain dinner. So skipper Ash brought out the rods and it was a quick thing – boom, boom! And there’s a couple of tasty blue cod on the end of my line. (Life may be slow around here I thought, but the fishing is fast). So, only fifteen minutes after leaving French Pass we had caught our quota of blue cod, had some rapid fire entertainment, and I had been dropped off on the island, with bike, ready to ride.

It was a relaxed jaunt from Kapowai to the resort at Catherine Cove. With the island possum-free, I noted an abundance of native trees interspersed with some pretty plump wood pigeons.

After 9 or 10 km, I turned off the smooth main road and found myself on a steep rocky descent. With the stupendous views proving a distraction, it was with relief that I successfully negotiated the rock garden to reach my destination. 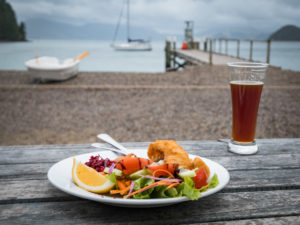 The D’Urville Island Wilderness Resort is a tranquil spot, set in sheltered Catherine Cove. As the only resort on the island it offers a guided excursions and a range of accommodation options. But right now, after that ride, I was more interested in discovering what had happened to my blue cod. I wasn’t to be disappointed. Preceded by local honey and succulent mussels, the fish was absolute perfection. It’s only when seafood has been alive and kicking a few hours earlier can it taste as good as this, I thought.

The next morning brought driving rain and an excuse to laze indoors. But at the first sign of clearing skies I was off, keen to explore more of the island. The late start however necessitated a change in plans, with a shorter ride over to the islands west side now on the cards. 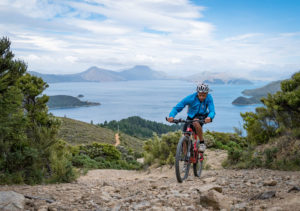 After a punishing ascent to the ridge I entered the cloud cover. A damp 90 minute slog westwards then ensued, with gale winds constantly threatening to unseat me. Views were scarce, aside from water dripping from my helmet and mud on my sunglasses. But then, after a particularly long descent, I broke back through. Greville Harbour, windswept and desolate, opened up below me. It was time to take a break and refuel.

The weather cleared further on the homeward leg. The road is mostly closed in by bush, but I did catch the odd glimpse of this wild and untamed island. No people though – not a soul.

Back at the resort, the guests and I prepared to set sail. My trip to D’Urville seemed all too brief, though it was wonderful to have had a chance to experience this island paradise. There’s something about the separation of an island that you don’t get on the mainland, and the compulsory relaxation on D’Urville is a great elixir if you need some time out.

But before the end we had just one more job to do – yep, another quick fishing session. Just a small parting gift from Ash and the resort to make sure we had dinner sorted once we got back to our busy lives. That’s island style, right there.