Described by the Kennett Brothers as the “Gruntiest MTB climb in NZ”.  And indeed it was a beast, and not on only the way up.

We departed Blenheim early on a fine summers day, and by 9:30am we were at the foot of the mountain and I was ready to farewell to my companions. They had opted for the easier task of eating ice cream at the Lavender Farm right in the mountain’s shadow. I was going to try to ride up it, a 1600m ascent over about 8kms.

It had been pretty easy to find the carpark from which the ride commenced – from SH1 a few kms north of Kaikoura, an inland turn onto Postmans Rd and then just a matter of following the signs to Mt Fyffe Forest Park.

For the first few km’s I was optimistic. Despite coming off an injury with very little riding, I was feeling not bad. The gravel road was a well graded granny ring climb. However, as the sun started to beat down the road got rougher. Some sections had very loose stones with melon sized rocks demanding the rider to concentrate on the  best line. With a nonsensical goal of riding straight up to the 1100 metre hut without getting off, I was disappointed when I was undone by a front wheel washout. The road was too steep and rough to entertain thoughts of re-mounting; a stiff walk in cleated shoes while looking for spots to resume riding ensued. Before long I arrived at the 3rd lookout seat. Not a bad spot for a swig from the camelback and a bite of Mars Bar. 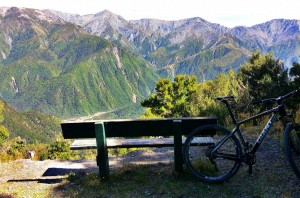 As the crickets started their song and the temperatures rose, I pushed on. The road truly was relentless, an absolutely brutal climb. Each straight might be about 70 metres, and the upcoming curve in the road suggested a respite. But like a vanishing oasis, the curve only presented another merciless taunt. The view to the coast encouraged though. You could see just how much altitude you were gaining as the Kaikoura peninsula took shape to the east.

So the pattern played out. A slight softening of the gradient allowed me to ride for maybe another few minutes, only to be thwarted by another boulder or area so steep and loose that I had no option but to succumb. To the west loomed never ending mountainous ranks. Any view up the mountain only confirmed how far there was to go. (And even then I was not sure that I was seeing the actual summit). And to the east, the idyllic plains and azure coast far below mocked me for a fool in choosing this harsh mountain over themselves.

After eighty minutes constant climbing I arrived at the Mt Fyffe Hut. What a relief, in more ways than one. I had seriously underestimated this excursion, including my fuel requirements. With the heat, I had been slurping ice cold water from my camelback over-enthusiastically. And with just a half Mars Bar left, and about 4 cough lollies, I was seriously under-stocked. Yet my mood was good. The hut sits at 1100m, so that’s two thirds of the climb over I reasoned. (Reason’s overrated). 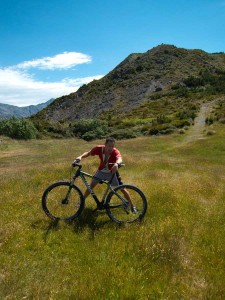 And a brief break was just what I felt like. I rollicked into the hut to find an elderly couple finishing lunch. They were curious; I don’t believe there was anyone else silly enough to be biking this behemoth. We got chatting and I wasn’t shy in asking them if they wouldn’t mind boiling some tank water for me. Not only did they kindly do this, but they pressed a handful of wonderfully salty rice crackers onto me. After a few photos and many thanks I was ready to tackle the final 500 metre ascent. 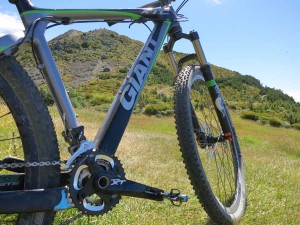 The first kilometre or so after the hut was not a difficult ride. The native bush had given way to pine and scrub by this height, and I made good time. I had been warned by the gentleman at the hut that the ascent to the summit was tougher than the lower section, and I was starting to wonder at that. But sure enough, the path began to climb steeply once more and became strewn with boulders of various sizes as it switched back up the slope. It was now early afternoon and the hottest part of the day. Shady relief was no longer available and again I was off the bike, plodding in my shoes and cleats and ever wary of twisting an ankle. Sweat was flowing from my helmet, which was only being worn to protect me from the sun. I was starting to struggle and had to find some type of rest stop. 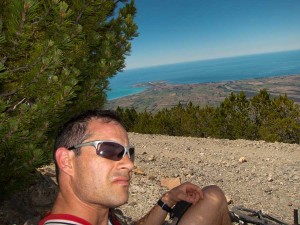 Under a scrawny shrub I had all but a scrap of my Mars Bar and some half melted cough lollies. After washing this down with warm water, I was back onto the bike, pedalling another hundred meters or so before a trudge to a brief plateau. Onto the bike again and a brief coast along the ridge for a minute or two. At last I could ride at a speed greater than walking pace and feel the wind rush by! A sign denoting that I was at 1500m encouraged; although I was once again forced to hike up the steep gravel path, I felt my energy renewed. Twenty minutes or so later I spied what looked like a pole in the distance. And surprisingly, the outline of a person. Before long I encountered the explorer – a young lady who had spent all morning on the summit. She had watched the sun rise and explored some of the surrounding area – her experience at first light sounded amazing. (I began to think how good it would have been to leave the carpark at 3:30am and ride the ascent with lights). However, for now the goal beckoned and, determined to ride onto the summit as opposed to pushing my bike, I struggled back into the saddle for a last gasp to the top.

Finally, I had made it. No more climbing, no more punishment. I had conquered the beast, but really I was only half way there. I had only conquered the ascent. 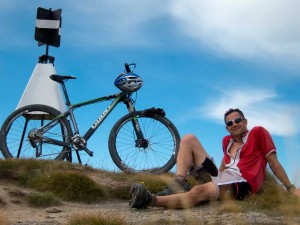 So – after photos, rest, cough lollies, the last of the Mars and a bit of a stretch it was back on the bike. I had given my bike a brief once-over (especially the brakes) and now it was time to point my front wheel downwards. The bike picked up speed rapidly with such a steep decline. Before I knew it my brakes were softening and I was desperately trying to avoid becoming mincemeat on the boulders. I flew past the 1500m marker and along the plateau (allowing my disk brakes to cool a little). I passed the girl not long after, thinking that the sweat & tears I’d expended on the way up with the bike were now paying dividends. This was the way to get down the mountain! But I was constantly on the brakes. This was one ride where you really had to obey the old mountian biking mantra of controlling your speed. Take a spill onto the sharp rocks below and I’d be looking like grated cheese – that’s if I didn’t end up over the cliff. This was one descent you wouldn’t want to attempt if you weren’t alert. Constant concentration was a necessity. However before long I was forced to take a break, give the brakes some time out and unclench my hands from the brake levers. The brakes were seriously soft and far too hot to touch. I checked my water supplies and figured I’d be down the mountain soon. So, time to spray the brakes. The rotors fizzed and the steam spewed. 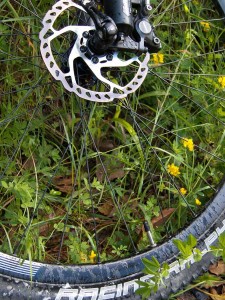 After a minute it was back rocketing down the hill, passing the hut (after repeating the brake cooling process), and down to the lower mountain. No time to enjoy the view with the head sized boulders ever threatening to unseat me. I shot past a couple more groups of hikers on the lower mountain. The descent became more enjoyable as the road smoothed out a little. I carried a lot more speed and before I knew it, I was back again at my point of departure 3 hours earlier! Yep, about 2 1/2 hours up, 40 minutes down. I figured I stopped 5 times on the descent to water the brakes (and take a mental breather too). But what a descent, a real test. In fact, what a great ride all in all, made all the better by having my wife & baby boy meet me at the bottom with fresh sandwiches, sugary juice and even a bit of a foot rub. 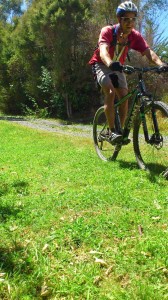 And now I got to see what they had been doing all day – relaxing in the nearby lavender gardens. The perfect place to unwind and reflect on a great day’s mountain biking.

What would I have done differently? I needed more than 2 litres of water on such a hot day, and more food than a single Mars Bar and some cough lollies. And the substantial hiking areas would have been much easier if I had some more casual style cleated shoes. But the bike was a good choice, light weight being important. And the 29 ” wheels abstracted me from some of the constant jolts. Whatever you take though, be prepared to have a great day – although you probably won’t feel that way on the ascent.