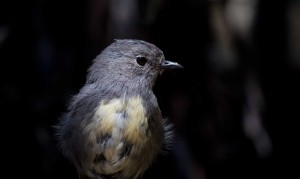 This image was taken at West Bay, St Arnaud during a camping trip. I’d just returned from a hike up to the Parachute Rocks, and was chilling out by the tent when I noticed this social little fellow hopping around the campsite. The late morning light was dappled as it filtered through the trees. Ignoring the sandflies, I grabbed my camera and got down to ground level, waiting for him to spring into an area of sunlight. He was perhaps 2-3 metres from me when he did just that, and I took about 3 photos. I like this one the best as it is the only image where the robin’s face is in profile.
I think one of the keys to this image is that photos of creatures (that includes small children!) are often much more engaging when viewed at their level. The image would not have the same appeal if I had taken it whilst standing. From a technical perspective, using Partial Metering ensured the exposure was correct for the bird, allowing the background to fade to black.

Slight increase in contrast/sharpening/saturation and a minor crop.

* This image was exhibited at the PIX2015 Photo Conference in Seattle, USA.

About a month ago we were in Nelson at a hotel beside the Maitai River. The river was low but rising fast as the evening tide came in. A number of shags were seeking dinner and I thought it would be great to show just what these guys can fit down their throats.
They were, however, fishing on the far side of the river, and with only a 300mm lens I had to get closer. I waded into the river, and, getting my lower half quite wet, clambered up a pylon under a bridge. It was a good spot, but now the birds had gone! Patience paid off though, and before long I could see a dark shape swimming below the surface. I tracked the bird through the viewfinder, and as it broke the surface I fired a burst of shots. This cycle continued for about quarter of an hour as the fish eluded the shag and I quickly started filling up my memory card. But as the daylight was starting to fade, I got lucky and the hunter came up trumps. What’s more, he had a hard time getting the victim down, so I had time to shoot maybe a dozen frames. Back in the hotel, I reviewed the images. Despite being cold and wet, it had been worth it! The shag had caught the fish, and I had caught the shag.

Using the triptych format (an image divided into three sections) gave me a way to demonstrate the process of the catch and the size of the shag’s dinner. I had a few good frames to choose from but after a drawn out decision process, I elected these three. The first frame shows the submissive eye contact of the victim, the second shows his full length revealed, and the third reveals the elasticity of the shags throat. I selectively adjusted the saturation, reduced the highlights and modified the curves. Then I applied a square format and sync’ed the adjustments across the three images. The last task was to manually stitch and border the images. 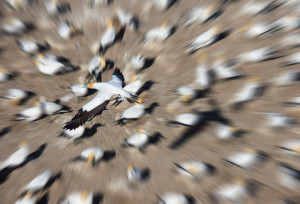 Picturesque Muriwai, west of Auckland, can be compared to a large Asian city – crowded, noisy, smelly – and photogenic. About 1,200 pairs of raucous adult gannets nest here each summer. For the keen wildlife photographer, Muriwai is a must-visit location.

I took this image with the intent of capturing a bird in flight against a patterned background of stationary colleagues. Afterwards though, on the computer screen, the image lacked any real punch. I don’t normally radically alter my images in Photoshop, but I think this is a good example of how post-production can add impact to an otherwise so-so photo.

After adjusting contrast, I used the radial blur filter (zoom setting) in Photoshop on a separate layer, and then used a layer mask to seamlessly blend in the gannet. Depending on your taste, the treatment works quite well due to the textured, yet simplistic, background.

I’m mountain biking in the Marlborough High Country, the light is bad and there’s no drama in the sky. The camera is staying in the backpack. But then I see this outcrop and I decide it would be cool to have a figure looking out on the landcape to illustrate the enormity of the country.

But how to trip the shutter from 100+ metres away? So, I move the camera closer (at a bit of a hit to the composition) and opt to rely on triggering it using Wi-Fi via my phone. Without a tripod I balance the 70-300 precariously on a tussock bush – and then scramble tentatively alongside the 45 deg rocky slope (in bike shoes) to get to my point. Upon reaching ‘pose spot’ – lo & behold, my phone reports that connection is lost with camera. Not all that surprising, considering the range is documented at around 50m.

On the way back to the equipment I get the bright idea to start a timelapse, which would give me plenty of time to get in position. And do so, only to discover on returning to the equipment that the timelapse only fired the first 2 frames for some reason. Two fails thus far.

Attempt 3: Restart the sequence, ensuring that indeed it is working properly. Each return trip to the outcrop is costing 10+ minutes and I’m running low on water. This better work. I make the trip, pose in 2 or 3 positions, return to equipment… but where is the equipment? The camera has toppled off the tussock, and I’ve captured a dozen lovely frames of Awatere soil. I hurriedly check to see if it captured any keepers, being more concerned about any scratches or dings. No keepers. No dings.

Maybe it wasn’t meant to be? But I’d come this far and couldn’t give up now. Attempt 4, set up, scramble, pose, return. Check camera. Finally, phew – let’s get out of here. Pack up stuff… but where’s my bank card? It had fallen out of my phone/wallet during Attempt 1. So, back along a very familiar route to try to track it down. (Successfully).

And the image is not even that great. But, hey, if I hadn’t tried I’d never know, right?

A little contrast, and decreased the blacks slider.